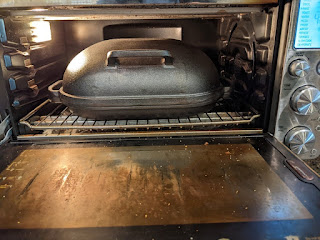 Yes, it does. But I would not want to try maneuvering the Challenger Bread Pan in and out of the Breville when it's at bread-baking temperature (250C / 480F). There just isn't that much space for your oven mitts between the walls of the oven and the bread pan.

I think you're much better off with a standard 6 quart Dutch Oven (assuming a metal knob for the lid), or something like this Lodge Double Dutch Oven, which you can more easily maneuver in and out of a Breville.

I baked bread exclusively in a Dutch Oven with my Breville for more than two years. You can achieve great results with that combination. You just have to account for how close the heating elements are to the bread. Perhaps I'll write a post about that someday.

Opting out of Daylight Saving Time is allowed under federal law, so states can stick with Standard Time. If a representative really believes in permanent Daylight Saving Time, it can be emulated by adopting permanent Standard Time, and mandating state government offices open an hour earlier than they currently do. Problem solved, and it's implementable under current federal law.

The other question I wonder is if people understand the implications of non-shifting time zones. Let's take four examples from the Pacific Time Zone, from north to south:

So is not implementing a time switch twice a year preferred? I don't think you can ask someone from Arizona or Hawaii. Both states seem well situated for their time zones, with reasonable sunrise and sunset ranges. The time switch is certainly a painful adjustment, no matter if you're gaining or losing an hour.

Word of the Day: Ad Hominem

This week's word of the day sketch is ad hominem. 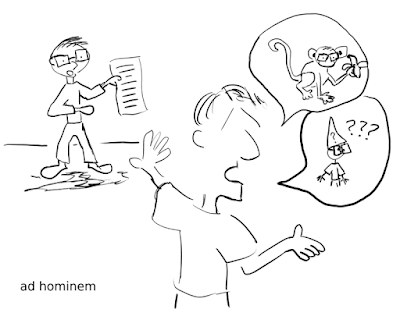 Annoyingly, brushes don't seem to scale when zooming in and out of documents in Krita. Is it an old Wacom tablet thing, a Linux thing, or just a thing, I wonder?

Word of the Day: Effusive

2020 was supposed to be the year I attempted Inktober, or something similar. But October came and went, and I completely forget about it. "Next year," I told myself, as I did the year before, and the year before that. But why wait? Getting word prompts is easy. Online dictionaries readily offer them up. Merriam-Webster even has permalinks to theirs.

One drawing a day seems a bit onerous. One per week seems more reasonable, so I came up with the following "rules":

I expect it'll be a bunch of quick sketches at first. I may put more effort into it once I get comfortable drawing on my very old Wacom tablet (the one I was using to draw Home Run) in Krita.

With that, the inaugural Word of the Day sketch is effusive. 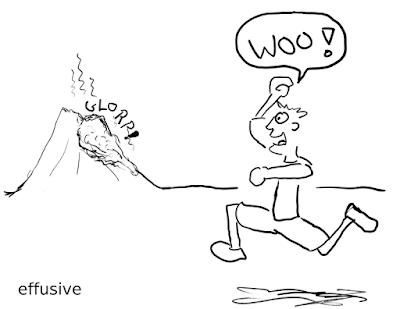 I recently had need to print an image I created in Gimp on a Canon Selphy CP910, and encountered more difficulty than I expected. Seaching for solutions on the Internet brought up very little useful information, so I thought I would write a quick note here, and maybe the search engine bots will take a liking to it.
The Canon Selphy is a dye sublimation photo printer that makes 4 inch x 6 inch prints on photo-quality paper. It's very good for printing "snaps" from your digital camera. But if you edit your prints before you try to print, there is a chance the Selphy will refuse to print your image. And to reinforce its stance that you should only print originals, it will advance the ink cartridge, and you will get one fewer print off the cartridge. Money down the drain. Here is one use case that can cause that to happen:
I needed to print a couple head shots for identification. The image had to fit within a 2 inch square, and the face had to fit within a minimum and maximum portion of that square. "No problem," I thought. I could take a couple of head shots with my DSLR, crop and resize them in Gimp, and combine them into one 4x6 image to save on printing. I could even add boxes to indicate where to trim the photos.
A 4x6 photo has an image ratio of 1:1.5. At 300 dpi, that's 1200 pixels x 1800 pixels, so that's the size I created my document in Gimp. After scaling my head shots so they fit within the ID requirements at that resolution, I imported them as layers into my Gimp document, and added nice, red boxes around the head shots to indicate where to cut. Then I exported the composite image as a jpeg, stuck it on an SD card, and went to print it on the Selphy.
"Unable to print photo," the Selphy informed me, as it spit out a blank photo, and advanced the ink cartridge.
Looking for solutions on the Internet, someone suggested that maybe putting the original image's EXIF data in the composite image would help. So I tried that.
"Unable to print photo," said the Selphy, and advanced the ink cartridge.
"Maybe if I use a Windows box to create the image instead of my Linux one?" I thought. I spun up Gimp on Windows and re-exported the image.
"Unable to print photo," said the Selphy, and advanced the ink cartridge.
Then I remembered that some years ago, I created a photo booth out of an old DSLR and a Raspberry Pi. It took multiple photos and composited them together using Image Magick. Those images successfully printed on the Selphy, and were effectively created on Linux, so maybe it was Gimp? I converted a PNG exported from Gimp to a jpeg using Image Magick and tried to print that.
"Unable to print photo," said the Selphy, and advanced the ink cartridge.
I dug up an old photo booth image, and examined its image information. The photo booth image had an image ratio of 1:1.48, so I cropped my composite image in Gimp, and exported it.
Et voila! The Selphy happily printed my image.
Moral of the story: If you want to crop an image, or create a new one on your computer to print on a Canon Selphy (at least the CP910), don't make the image ratio 1:1.5! Other ratios may work, but 1:1.48 works for sure.
Posted by Andrew at 1:38 PM

Fixing a Stuck Door on the Breville BOV900 Smart Oven

Like many people who have purchased a Breville BOV900, after about a year of use, the door got stuck open. At first with enough jiggling, the door would close, but eventually, it got stuck, rendering the oven useless.

This actually happened to me twice. The first time, I got a replacement oven under warranty. The second time, I decided it wasn't worth the hassle, and searched for a replacement. I quickly found out that there really isn't an equivalent oven on the market, so I decided to see if I could repair the door.

As it turns out, fixing the stuck door is rather easy. To do it, you will need a #1 Phillips screwdriver with a narrow neck, a T10 Torx driver, and needle nose pliers.

Disclaimer: I do not guarantee that the steps shown to fix a stuck door on the Breville BOV900 will work for you. By following these instructions, the user takes responsibility for any and all outcomes, including, but not limited to, voiding the warranty, rendering the oven useless, destruction of any property, and physical harm to oneself and/or other.

Before attempting to fix your oven, unplug it, and remove the racks and crumb tray.

To disassemble your oven, you need to remove 12 #1 Phillips screws from the rear of the oven that are holding the top on. 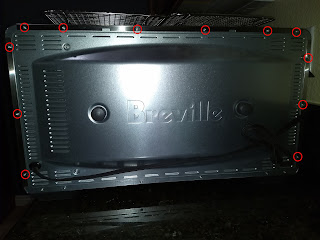 You will also need to remove four T10 Torx screws from the sides of the oven (two on each side). 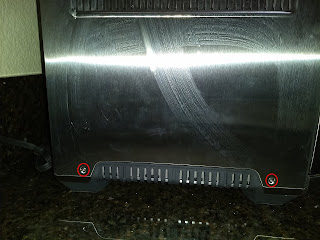 Finally, remove the six #1 Phillips screws in recessed holes on the bottom of the oven. 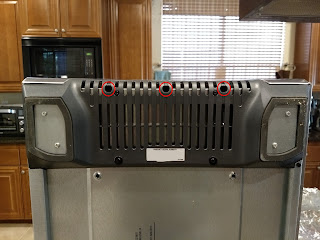 Once that is accomplished, you should be able to slide the top of the oven off, or at least maneuver it sufficiently out of the way to facilitate the repair.

With enough heat cycles, things deform enough that the leaf and the door lever interfere with each other, preventing the closing of the door. Instead of getting pushed down by the door lever, the leaf gets pushed up and back, stopping the door from closing.


Once the leaf is sufficiently bent, the door lever should, once again, press down on it when closed.

To put the top back on your oven, make sure the slots on it facing the front of the oven slide over the silicon gasket, and it seats properly. Then put all the screws back. Don't forget to replace the crumb tray and the racks and to plug in the oven.

Enjoy your working oven, and hope Breville fixes this design flaw in the next model.
Posted by Andrew at 7:17 PM

It's the beginning of a new year, the traditional time to make New Year's resolutions. My resolution every year, even if I don't explicitly state it, is to try to be a better person.

Now, what "better person" means has evolved over time -- at least in the specifics. And over time, I've found pieces on the Internet written by much better writers than me that talk about how to be a better person in whatever specific they were writing about that had some good advice or observation.

This sort of writing has captured my interest more and more the older I get. It's going to culminate in a "what would you tell your 25-year-old self?" essay, no doubt, some time in the future (not any time soon, I hope). Consider this research for that essay.

First, a series of articles by David Brady from his blog, Heart, Mind, Code / Why Dave Why about loyalty in the workplace.

Next, Kate Heddleston's excellent article on being a team player.

Talin's collection of essays, which I described to my colleagues as "old person knowledge", do a nice job covering the soft skills one picks up as a professional engineer (or pretty much professional anything-that-involves-working-in-a-company).

And on being a better person in general, Brady Haran's conversation with Cliff Stoll on the Numberphile Podcast may bring a tear to your eye. Well worth the hour to listen to.

I may re-post this entry occasionally as I add more links. It'll be much easier to find when I need it if it's near the top of the stack, and it'll help make this blog look like it actually contains something, now that Home Run reruns are complete.
Posted by Andrew at 6:00 AM